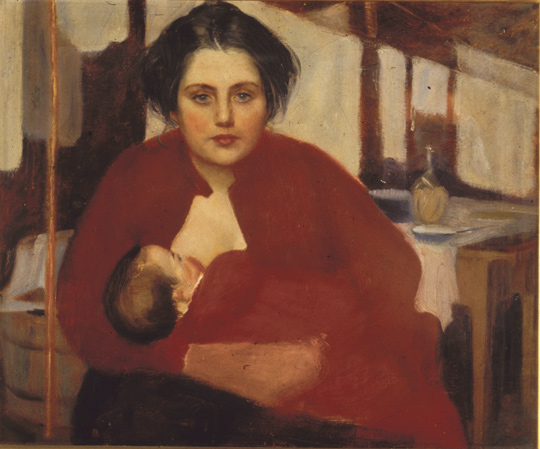 Elisabetta Santolini is the woman that Domenico Baccarini loves intensely and from their union a daughter, Maria Teresa, was born on 4 August 1904. Mother and daughter are represented in this work, as they were in many others of this artist from Faenza who died at the age of 24 in 1907.
In his portraits <<Baccarini delves - wrote Renato Barilli - digs frenetically into the facial features, whether they are his own, those of his relatives, mother, sister and, particularly, the woman he loved, Bitta>>. And so, for Renato Barilli <<even Baccarini, whose works span the turn of the century, is an Expressionist, or a lover of an unforgiving, bitter, impertinent figuration more or less the same way that Barcelona's Picasso was, at the school of Isidoro Nonell>>.
In the image captured by Baccarini, the viewer is impressed mostly by the overwhelmingly expressive component focussed on Bitta's intense glance and on the red element that occupies the entire centre of the painting, in contrast with the background of white linens hanging to dry and the intermediate space with a table laid for a meal and a basket to reinforce the description of the domestic interior, as interpreted by Domenico Baccarini. 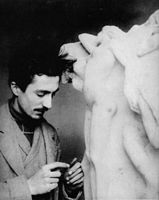